What could it be?

I reached at 8:30 am, the venue was well curated, guards and officials to guide you from the entrance to Tracks.

Volunteers waiting to help you with anything and everything, they helped me do the registration and get my Speaker’s ID. 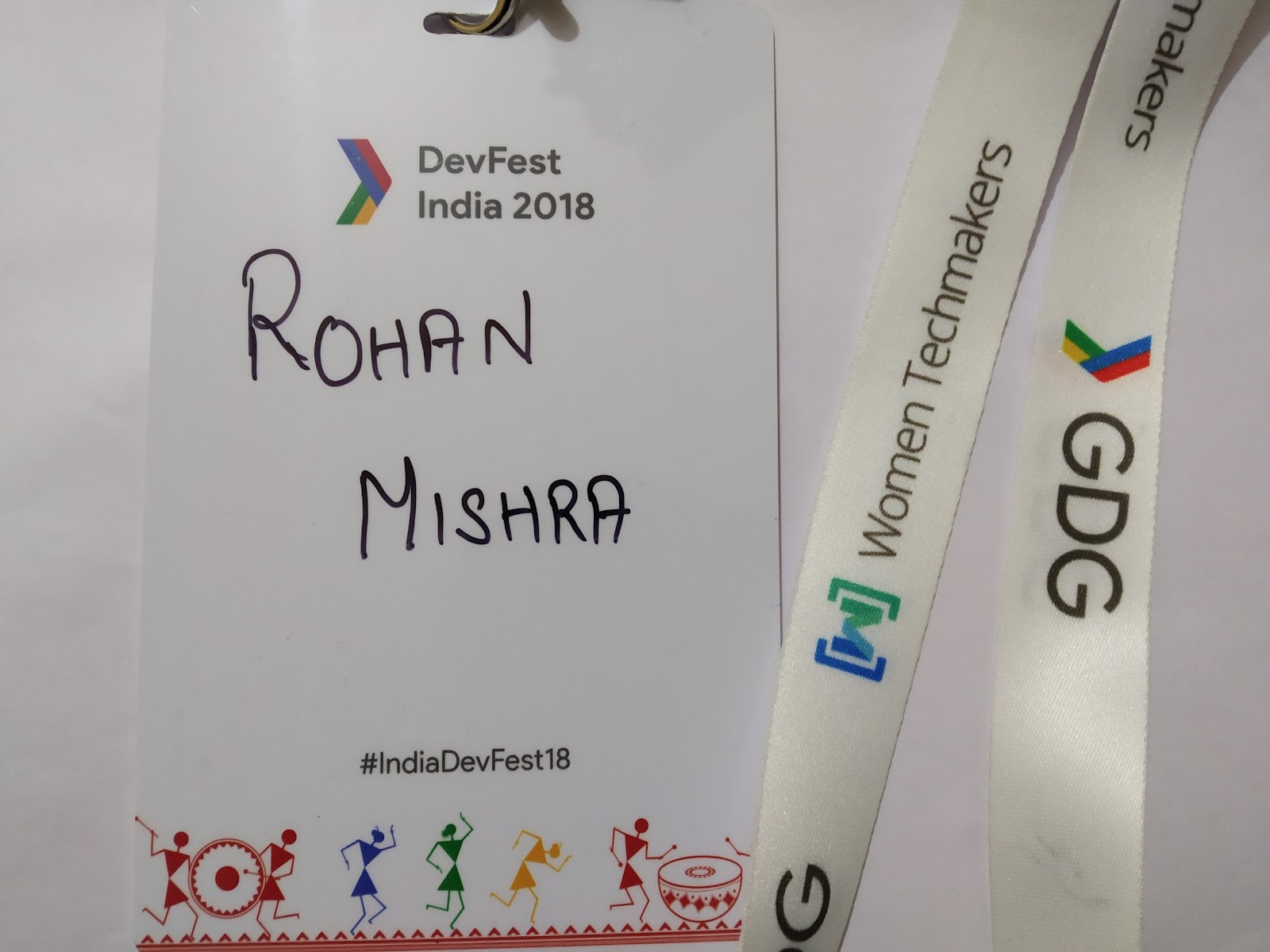 Meanwhile everywhere you look, you will find everyone either to learn or to share or both. Few people at the photo booth waiting to get their picture clicked.

In the joy of the moment almost forgot that I have to take a session in an hour. But the tension didn’t leave me alone longer as one of the volunteers came by and reminded me of my session :p .

While waiting for the event to start, I met some of my mentees, my colleagues in the last office, Aman Sir and My Mentor Jagriti mam. That gave me enough confidence and most importantly will have at least some familiar faces in the audience to support. 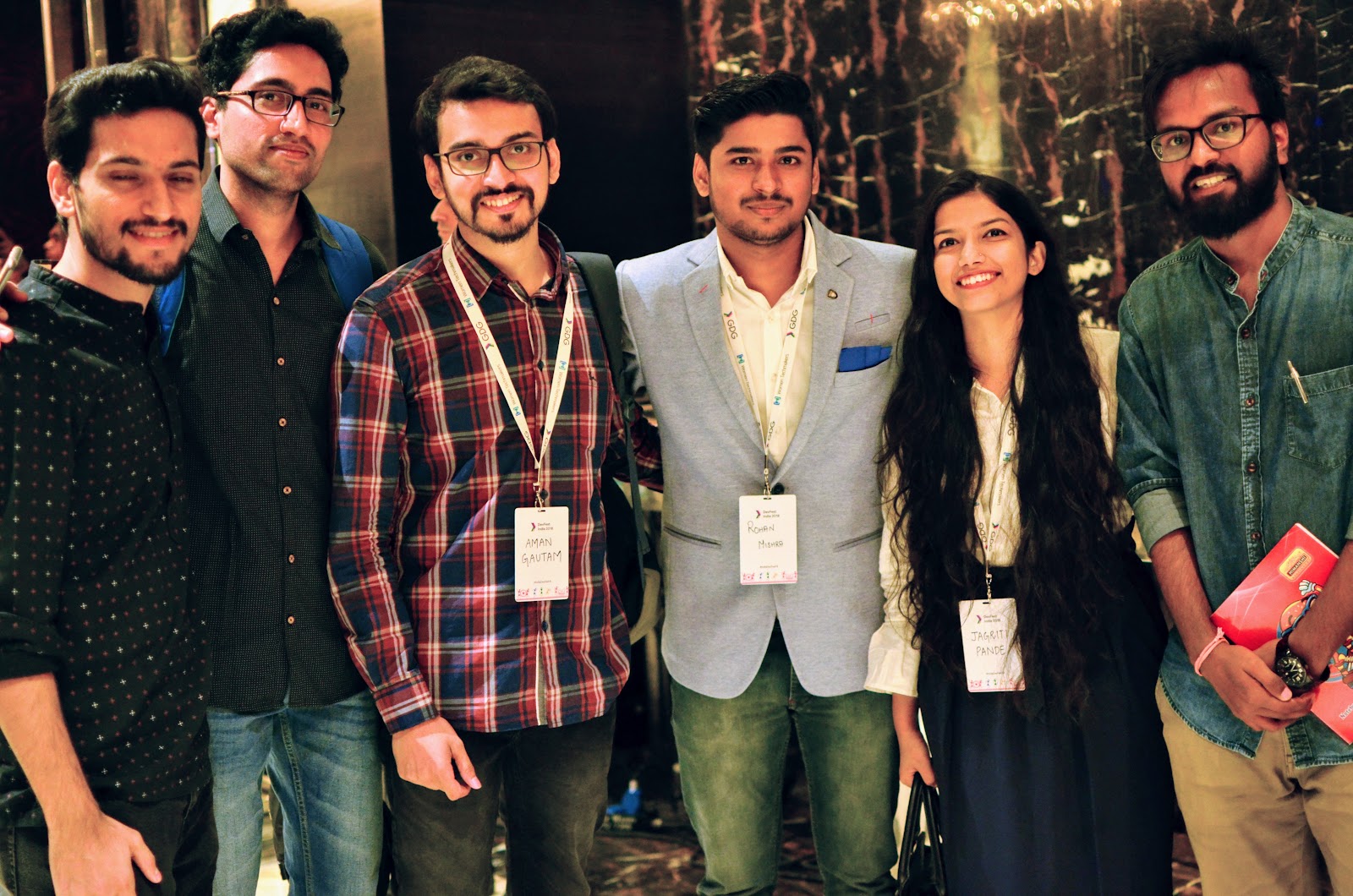 The Tracks were divided on the basis of technologies such as Design, Android, Web, Design Thinking workshop. And as obvious it may sound you can only attend one at a time unless you can split into halves 😀 .

At that moment I just wished can’t these events happen at different times, and all I will be needed is more hours to go through them all.

As there is so much to learn from everyone. And I can learn from the most refined sources and resources of the Co-Speakers. And use the extra time to meet new people, make a new LinkedIn connection, talk work and much more.

I attended Track 1 until my session wasn’t started.

Arpan sir, hosted the Keynote session in Track 1. His love towards functional and mix of Design with Development is not new. He has always been curious about the Design aspect in Development. 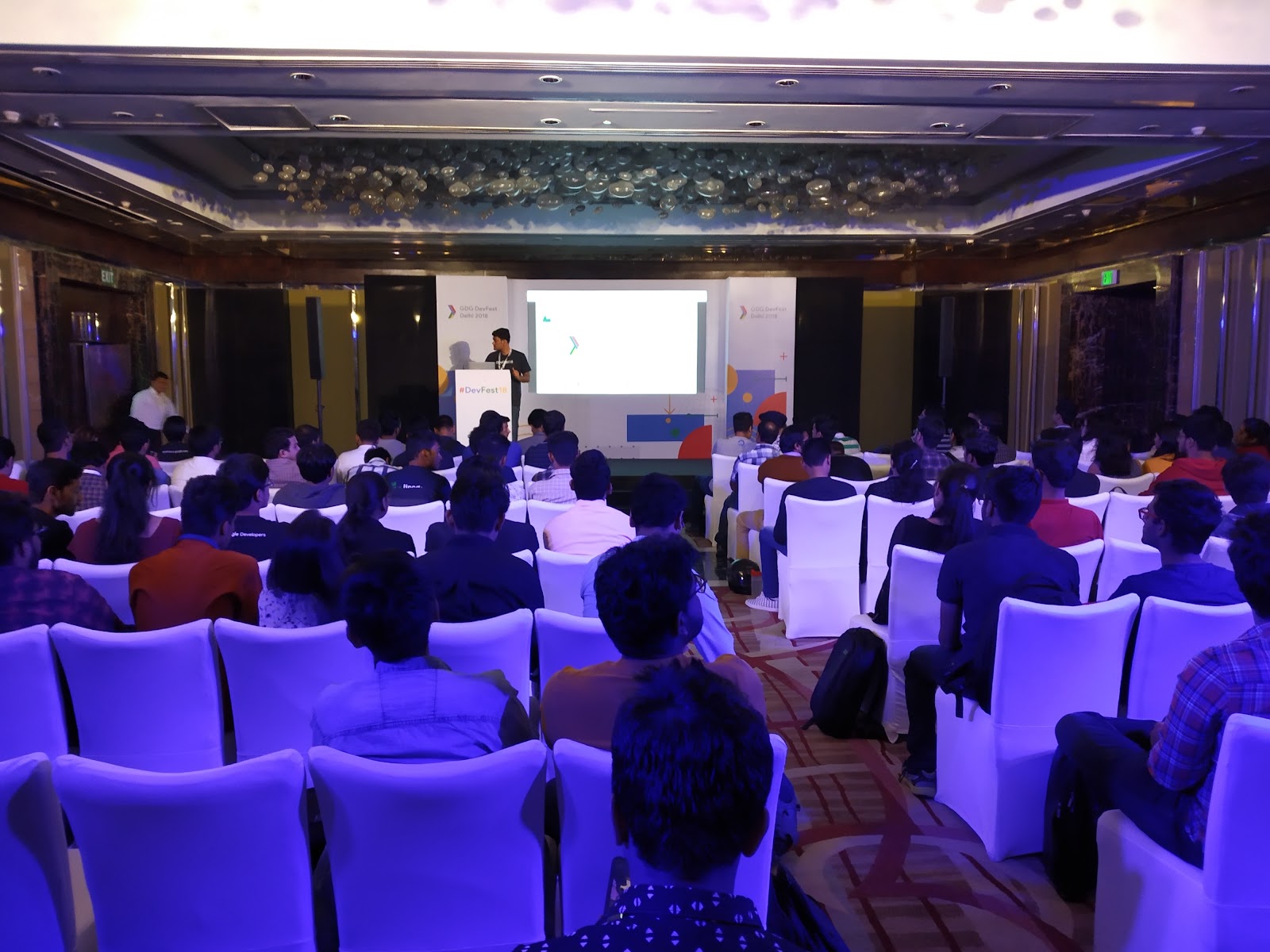 As you can see beautiful lights, awesome ambience and enthusiastic people.

Keynote started with welcoming everyone to the Devfest. Introduced GDG and WTM with the roles and collaboration in making these events possible.

Extending the vote of thanks to the Communities that played a major role in shaping up the communities.

Becca, gave the first talk on "JOMO" - The Joy of Missing Out and the Freedom of Disconnecting. As a UX Researcher herself she explained the role of research and design in today’s life and how can we see it with a whole new perspective. I didn’t get a chance to talk to her then.

Although I got some alone time with her where we discussed Google’s Design Culture, Discussed our personal experiences, How to make Communication effective amongst the teams working on the product and Moving from convincing mindset to collaborating Mindset.

P.S. Becca, I would love to attend “How to make Engineers do, what they don’t want to do” 😀

We all as a Designers love to do User Research talking to users, listening to users, She shared insights on How to validate those insights with data for Better Product Decisions.

Couldn’t attend till the end due to my session.

Unleashing your Creative Confidence aka My Session

I started my sessions by asking “Who here thinks he is a Creative Person?”

[Little to no Hands up]

Oh, Apparently I got the right audience.

A few years back, I was very much sure that I am not creative. Often said to people I am not a creative person and believed the same.

When I started Designing 4 years back, I didn't know at that time creativity is not designing. So, at first, I thought how can I be a Designer? I can't even Draw. I didn't have a clear idea that Design, Creativity and Art all three are different.

Then after a while, I realized the relation of creativity, Design and Art. Yes, It's a part but not the whole. Thought I was not creative since the beginning.

When I was a kid I used to make stuff on paper, with things some of them made sense, and some of them didn't. But I lost it with time may be due to fear of failure. 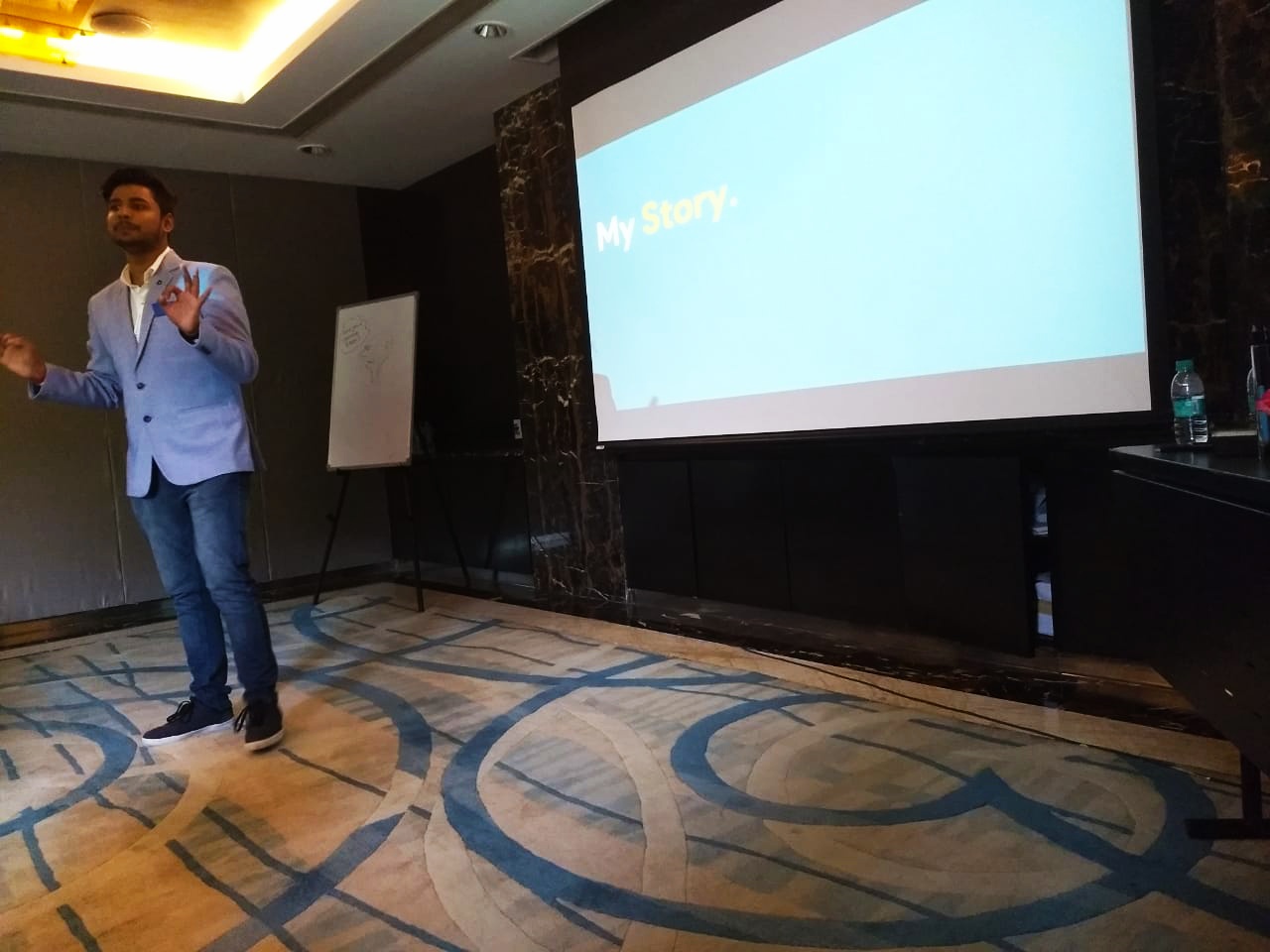 I grew up and meanwhile I lost the will and tendency to take risks. For the few months, I started being creative again.

Everyone is Creative, You might not have realized it yet.

I had planned two activities:

Process:
Everyone had a Pencil, Sheet with 30 circles printed on it and 3 minutes. They had to make as many recognizable shapes as they can in the given time. The things could be imaginary or real as far as it is recognizable. 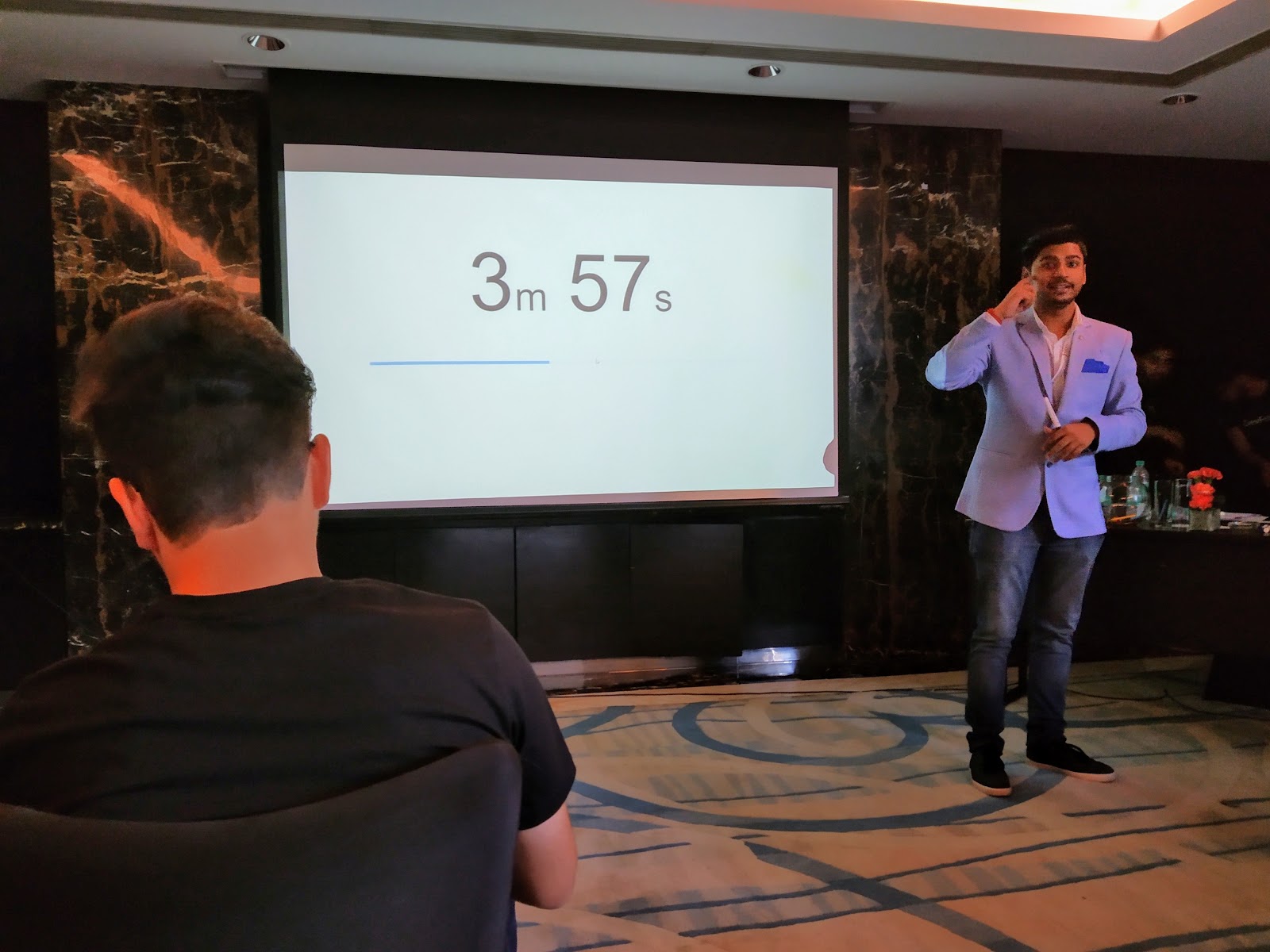 Result:
Someone made faces, someone made utensils, someone made different kinds of balls, and someone tried to make a car by joining the circles and at the end and more creative ideas.
So, the people who believed that they are not creative came up with such creative things.

One Emoji you wish existed:

Process:
Everyone had a pencil, a blank sheet and 7 minutes. They had to make one Emoji they wish Existed (This was on the Nose). 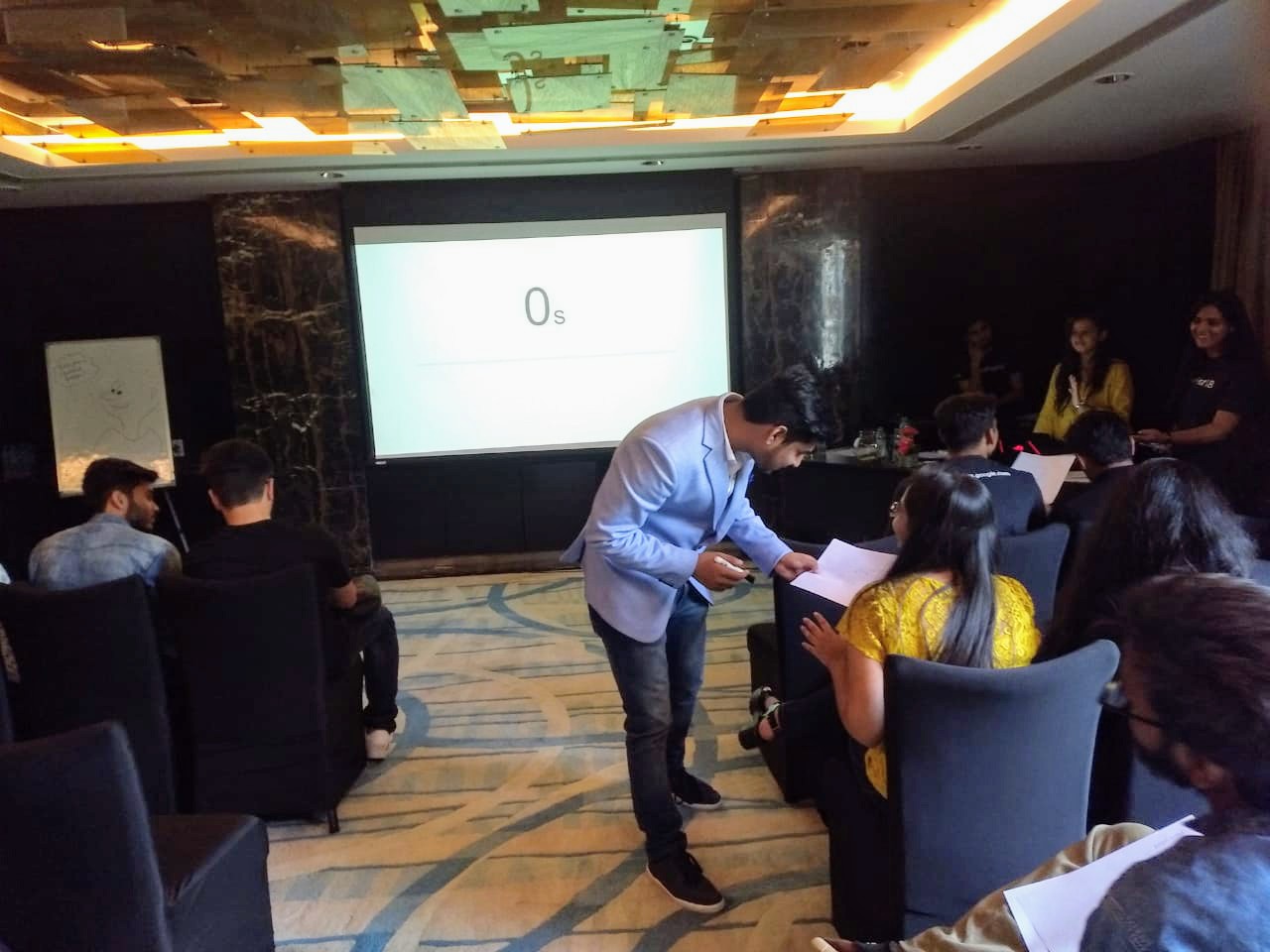 Result: Shlok made Faces of Groot from Guardians of Galaxy, Someone gave a social message around acid attack with a girl face half burnt, and someone made an Emoji on Generation of Broken heart and broken people.

And these ideas were coming from the people who thought they weren’t creative at all.

But that wasn’t all so we had some extra time and people wanted to do more.

I guided them on how to make simple but beautiful characters in 10 secs. And they created 3 characters within 5 minutes.

After a big applause, I remember it was euphonious. I took some Design queries.

As not many people know I am a Designer by passion but I am a Foodie from the heart.

And this Lunch was a treat, Serving North-Indian, Chinese, Veg, Non-veg, Desserts. The meal was Delicious. Can’t stress enough the Desserts from Brownie to Halwa, Kheer to Ice cream. My mouth is full of water as I complete this sentence.

Post Lunch, had some good conversations with Becca, Shlok and Parul, Avinash and other speakers. Had some amazing discussions with the students and volunteer. It reminded me of my days when I was starting out.

600+ people together in one hall. And no one could tell they have been in sessions all day long. Still, the energy was lifting the roof.

Organizers announced some coupons for the attendees from Google Cloud to Udacity.

We saw two 9th standard kids there, and they were happy, and so were we.

We all speakers had a group photo together.

Also did the volunteers and as Harsh Said, "Who will Volunteers arrange for, Who will Speakers deliver for if there is no Audience."

So thanks to everyone for coming. SWAGS were distributed by the GDG Volunteers.

I had a blast. One of the best Events I attended. It was all about sharing, learning, knowing each other better and Connecting. And that’s what community means. Or as we like to call it COMMUNITY= SHARING.

Hey, Thanks for joining us.

It was lovely meeting you all. Hope to see you soon.

Let's connect and be in touch.

Join my Newsletter to get the specially curated content on design, strategy, tips and resources on building successful products.

Universal Design: Design for everyone.

What all features or characteristics makes anything Universal. What is Universal Design? and How can you apply to your products in few simple steps?
Read More

Why Design Sprint is a must for Stakeholders?

Design Sprint is one of the tried and tested way to solve Big Problems. Why do you need to incorporate Design Sprints in your company?
Read More

This is all you need to know to conduct a UX Survey.

One of the best ways to learn about your users and potential users are the UX Surveys. Learn how to do UX Research using UX Surveys the Right way.
Read More